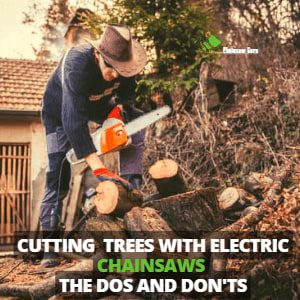 But wait, it is not as simple as you think. There are multiple factors that you should consider before cutting a tree with an electric saw.

Most people these days opt for electric chainsaws because of their special features. They are light in weight, easy to maintain, and do not create a foul smell.

Still, it can perform all the tasks from chopping firewood, cutting limbs of a tree, cutting logs, and other necessary tasks.

Electric chainsaws are powerful enough to cut wood of different types. However, they are prioritized for homeowners because of their comparatively less power than that of a gas chainsaw. If you want to clean up your backyard or cut firewood, an electric saw can do that. However, for big trees and professional purposes, an electric chainsaw is not sufficient.

Just In: Why Were Chainsaws Invented?

The most powerful chainsaw that has a large blade of 18”. It can cut through a large enough tree without much effort. The motor consumes 15 amperes of current to run along with a good cutting blade speed.

You might be thinking about the noise it may cause, so don’t worry the motor does not make much noise. Apart from this, it has other quality features such as auto lubrication and a self-sharpening chain that makes it more worthwhile. In the meanwhile, the chainsaw is available in a reasonable price tag too.

It is the best electric saw that is designed to perform the heavy duty tasks. It has an efficient motor that can run up to 2900 feet per minute. By using this saw, you can cut through large trees. The motor works on 14.5 amperes of current. The chainsaw also has a current limiter that stops the chainsaw from burnout in case of overload.

The chainsaw is corded so it works on direct current. It is a 16” long chainsaw that makes the cutting of larger trees easy. Also, it has many safety features that keep the user safe from many incidents. You can get the saw for approximately $450 on different marketplaces.

An amazing saw with the ability to even cut through hardwood easily. The motor works on a current of 14.5 amperes and the length of the saw is 16”. This combo gives strength to the saw to perform heavy tasks.

With this much cutting efficiency, the chainsaw has a self-lubrication system and does not require any tools for adjustment. Also, it has an auto tensioning system to prevent chainsaw chain tightening. The price of this chainsaw is around $150.

Pros and Cons of Electric Chainsaws

The most highlighted advantage of electric chainsaws is that they are easy to carry because of their lightweight design. Along with that, they require little maintenance. Of course, you need to keep your chainsaw in a good shape and tuned but it doesn’t require much effort as you may need with a gas-powered engine.

Though electric saws are very popular in the market these days because of their specs. However, for professional purposes, an electric chainsaw is not that powerful. So this is the biggest disadvantage of electric chainsaws.

Among corded chainsaws, the major issue is portability. You are only limited to operating in the area where your chainsaw cord can reach. In another situation, you can have a generator with you which makes it expensive for you.

Explore: Are Electric Chainsaws Any Good?

Based on the discussion so far, let me show you a compare-and-contrast picture of electric vs gas chainsaws. First of all, gas chainsaws are more powerful and can perform heavy duties as compared to electric ones.

The most powerful electric chainsaw has a motor of 15 amperes that can generate over 2.5 horsepower. This will be having the same power as that of most chainsaws having a 40-45cc gas chainsaw. For small-scale operations, an electric chainsaw is good due to its easy-to-use features.

Cutting the long story short, if you are looking for buying a chainsaw that can cut trees in your yard then you should opt for an electric one. The reason is that an electric chainsaw can cut trees and do home-related tasks for you.

Let’s say what The Getty Adventures has to say about whether electric chainsaws can cut trees or not:

Can you cut logs with an electric chainsaw?

Yes, you can through logs, trees, branches, and limbs with an electric chainsaw. However, it depends upon the diameter of the log and the power of your chainsaw. If you are having a motor that carries around 14 to 15 amperes of current, then it can cut quite a thick diameter of the log. With low-powered electric chainsaws, you can only cut small logs.

How do you cut wood with an electric chainsaw?

If you are first time using your electric chainsaw then you need to set up your chainsaw before use. You should check safety measures then chain tensioning, oil reservoirs for the chain, and bar oil. After that when you are done with the setup, plug in the cord (if you are having a corded chainsaw).

Then, you need to start your chainsaw after making the safety lock and pushing the trigger to start the rotation of the saw. Place the wood that you have to cut and make the saw in contact with the wood. While cutting, do not exert pressure for cutting wood, let the saw do it.

How much can an electric chainsaw cut?

The most powerful electric chainsaw can make as many as 100 cuts on a 6-inch wide-diameter log. This is for the most efficient chainsaw. However, other professional saws that are not as good, can make around 50 cuts. While an electric chainsaw that is used by homeowners can only make more or less 30 cuts on the same log.

Do electric chainsaws have kickbacks?

The answer is yes. Though an electric chainsaw has a much lesser chance of a kickback as compared to a gas chainsaw. The reason for this is that the electric ones are having a good mechanism for avoiding kickback problems. Secondly, these chainsaws are not as powerful as gas ones which reduces the chances of kickback and other dangers.

Do you need training for an electric chainsaw?

A proper license is not a requirement but if you are planning to work in some industry such as forestry, you need to be trained. These industries do not allow people to start working with saws without training. However, if you are a homeowner, then you can work without training but it is not suggested at all.

Mostly it is said that electric chainsaws are not as powerful as gas chainsaws. As a result, many people start thinking that if it can cut through a tree or not. Therefore, I wrote this artic for you to answer your queries.

This was all about can an electric chainsaw cut trees and how long trees it can cut through. So, it depends upon the efficiency of the saw. Since there is a wide range available in the market, you need to buy the chainsaw keeping in mind the tasks you need to perform.