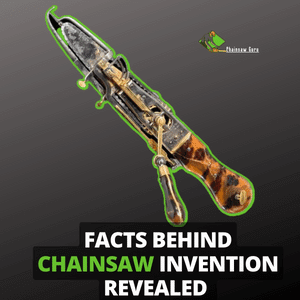 It’s scary that a killing tool like a chainsaw was first invented by doctors to perform surgical procedures.

Yes, you heard it right. The chainsaw that we now know was actually invented back in the 18th century to assist in a childbirth procedure called symphysiotomy.

Any time you hear the word chainsaw your mind imagines its sharp blade and thrilling noise. It is terrifying to imagine the same thing was being used on the human body and not just for amputation but for a life-threatening procedure like childbirth.

The history of why were chainsaws invented is interesting, the scary factor aside, how it went from a surgical instrument to the tree hunter and woodcutter we know today is the topic of discussion today.

Why Were Chainsaws Invented? Story time

The story goes back to 1700 when during childbirth, it was not always possible to save both the mother and her baby. A procedure called symphysiotomy was used to perform on a laboring mother in case natural delivery was not an option. The procedure widens the birth canal to take the baby out vaginally.

At first, this procedure was quite brutal, performed using a knife making it extremely painful and messy. Later on, in 1780 two Scottish doctors, John Aitken and James Jeffray introduced a tool to cut the pelvis.

They envisioned a rotating blade in comparison to already used sharp knives. And with this vision, the first chainsaw was invented. Though it was a success over traditional knife methods, not all doctors were able to do it due to its tricky use and dangerous nature. Plus it had a forever-lasting effect on the mothers.

Years later Bernhard Heine, a boy belonging to a medical family, spent most of his life studying under his orthopedic uncle Johann Heine introduced a new invention. He studied both medicine and orthopedic surgery.

With both of his areas of expertise combined in 1830, he invented a tool called osteotome or bone saw. It was created to cut through hard bones and was hand operated. Not only that, but it had sharp blades on a chain, wrapped around a metal surface the size of a kitchen knife. It used a crank handle to operate.

The tool was a success and won Heine a prestigious award in France and an invitation to Russia for its practical demonstration.

His invention took off and was adapted in multiple surgical procedures. For skull surgery, he added guards on the edges of the chain to protect the tissues and from splintering the skull.

The procedure kept improving with time and played a significant role in 19-century amputation. It now serves as a direct ancestor to the modern-day chainsaw.

What was the Original Use of Chainsaw?

It started out as a tool to help in a childbirth procedure called symphysiotomy. The pelvis was cut to widen the birth canal for natural birth. The procedure was dangerous, difficult to perform, and had long-lasting health issues. Hence it went out of practice in a few years.

In the case of childbirth, multiple new and careful methods were invented and performed. But in surgery and medical amputation, Heine’s bone saw clearly surpassed.

In 1907, Samuel J. Beans realized the use of amputation chainsaw as a way of taking down trees,cutting firewood or hedges and filed his patent. With that chainsaw took on a new route, made exceptional advancements, and now is a huge market with numerous competitors.

Why were Chainsaws Invented in 1780?

During 18th-century childbirth, complications had very limited procedures. The surgery was mainly cutting the abdomen and then the uterus with hands or scissors. Neither of them was fast to save the baby’s life or spare the mother some pain. The odds of saving one of them were low let alone both.

To deal with that doctors John Aitken and James Jeffray invented a knife-like chainsaw that rotates as it pierces through the bone. The purpose was to cut the pelvis in order to make space for the birth canal to widen for normal delivery instead of cutting the abdomen.

When did they stop using chainsaws for childbirth?

In the 19th century with advancements in medicine and technology the use of chainsaws in medicine was shifted mostly towards amputation and new methods were adopted for childbirth.

It looked like a kitchen knife with tiny teeth on a metal frame like the chainsaws of today. It was operated using a crank handle.

Who invented the first chainsaw and why?

John Aitken and James Jeffray, the two Scottish doctors invented chainsaws to operate C-sections on women back in 1780.

Who manufactured the first chainsaw for cutting trees?

Samuel J. Beans 1907 filed the first patent for the wood cutting chainsaw. His work was followed by James Shand in 1918 and in 1926 Andreas Stihl, owner of Stihl company, launched the first electric chainsaw.

Are chainsaws still used for childbirth?

No, they are not. Might be in third world countries where resources are very limited but that is very unlikely as well.

Do they still use chainsaws for medical purposes?

For amputation yes, but it has taken on an advanced form. But in childbirth no, even for third world countries it is unlikely.

Final Takeaways: Why Were Chainsaws Invented?

The chainsaw has come a long way starting back in the 1700s as a small surgical instrument to now not only as a woodcutter and tree hunter but also as a famous murder weapon featured in movies.

The intent behind this invention was to make long complicated labor less time-consuming with symphysiotomy and to increase the chances of saving both mother and her child. Although it was successful in that manner, it left the mother with a forever-lasting effect due to cutting the pelvis.

The procedure was later on labeled too dangerous and stopped but its use in amputation and bone cutting is still in use today with more advancements every day.

The same idea behind amputation was adapted later on the Chainsaw market that we now know today offering unlimited options with unlimited features.