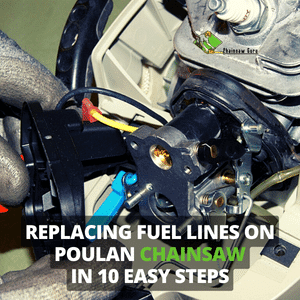 Replacing Poulan chainsaw fuel lines is not a difficult task but it does require some tricky steps. With the right tools and proper know-how, this can be done in a matter of an hour or less.

Whether it is replacing the new lines or attaching the pulled-free ones, this article provides a comprehensive guide on reinserting the tubes back in the tank and how to replace the fuel lines on a Poulan chainsaw.

Although the guide is specific to Poulan gas-powered chainsaws, the same procedure can be followed for Craftsman, McCulloch, Troybilt, Husqvarna, and MTD chainsaws as well.

Let me now get to the chase without any further ado:

How to Replace the Fuel Lines on the Poulan Chainsaw in 2022?

Fuel lines are responsible for carrying fuel to the carburetor in gas-powered chainsaws. With time they can experience

All these scenarios restrict the fuel flow and prevent the engine from starting. The fuel lines are as follows

The size of the replacement fuel lines should match the original ones. So when you take out the old ones, cut the new ones to the right size before cutting the filter off.

Before you get your hands dirty with the work

To get better understanding, check the fuel line diagram for the Poulan chainsaw below:

Steps to Follow for Fuel Replacement in Poulan Chainsaw

To avoid unnecessary running around and get it all done quickly, gather the following tools

Empty the tank in an approved container.

Use an Allen wrench to unscrew the screws holding the cylinder shield.

Lift the shield off.

Locate the spark plug. It is either behind or above the air filter.

Gently twist and remove the wire from the spark plug.

Remove the filter from its housing.

Remove the nuts that secure the carburetor using the socket driver.

Pull the air filter housing above the carburetor.

Remove the throttle linkage by pulling the trigger to get to the end of the linkage and pull it away from the trigger.

Carefully pull the carburetor off the mounting studs.

Use a needle-nose plier to pull the lines off the carburetor.

In some battery saws, you may have to remove the screws before removing the fuel line from the primer bulb.

Again using pliers take all of them out of the fuel tank.

Straighten the hanger and bend a hook on one side.

Through the mouth of the tank take out the cylindrical fuel filter.

Cut the new filter fuel line to the size of the old one.

Remove the filter by cutting the fuel lines.

The size of the new fuel lines should match the old ones.

Once all the lines are connected to their respective points

Have a look at this video tutorial for proper fuel line replacement:

Different marketplaces offer multiple repair kits at different price points. These kits contain some or all of the following

And much more. Each kit offers a different set of things. You can get which suits your needs the best.

How do you replace the fuel line on a Poulan chainsaw?

For a detailed step-by-step guide check this article.

Where do all fuel lines go on a Poulan chainsaw?

There are three fuel lines in Poulan Chainsaw

Which fuel lines go to the primer bulb?

The clear transparent one goes from the carburetor to the primer bulb. It is also called a primer suction line and has a thick diameter. Another one with a small diameter went from the primer bulb to the tank.

Why does my Poulan chainsaw die when I give it gas?

To avoid issues with the ignition, read this guide on How to Start a Poulan Chainsaw

How to get fuel lines into chainsaw tanks?

This provides the 2-way pathway to the tank.

Final Takeaways: How to Replace Fuel Lines on Poulan Chainsaw?

Fuel line replacement is part of chainsaw maintenance. These lines are responsible for the flow of fuel from the tank to the carburetor. With time the lines clog, crimple, or can break, and when this happens they need to be replaced. This limits the fuel’s flow, which makes it difficult for the engine to start.

Inserting the tubes seems straightforward, but this task has some tricky steps. With all the necessary tools gathered in a ventilated space, this can be achieved within an hour.