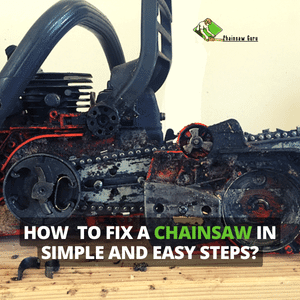 It’s very common to know there are two types of chainsaws. One is powered with gas and the other with electric or battery powered. Both are different to operate and in the same way, different to fix when they won’t start.

That said, this question that how to fix a chainsaw often gets asked by the homeowners and we are here to address it thoroughly.

Hop on to the main discussion as follows:

If your chainsaw is gas-powered, there are quite a few things that can go wrong and they are relatively easy to fix. You simply need to diagnose the following checkpoints:

If the chainsaw, that won’t start is electric or battery-powered then the problems might be different and one needs to check the following most obvious issues:

If you can’t figure out the problems beyond these simple checkpoints then you might need to have them checked by a professional.

How to fix a STIHL Chainsaw that Won’t Start?

There are many problems that can cause your STIHL chainsaw to stop working. First of all, you need to determine the source of the problem. Once you find the problem then it’s easy to fix your chainsaw.

In the STIHL engine the crankshaft powers a flywheel. When it spins, the magnetic energy is generated by two magnets. When enough energy is generated, the ignition module gets tripped and sends sparks to the plug where it ignites the fuel.

If there lies a problem anywhere in the ignition system will stop working. The ignition module stops engine combusting for several reasons, some are:

So, start at the spark plug and work back to the flywheel and ignition module, diagnosing all parts of the ignition system.

Moreover, fuel intake problems also stop the chainsaw from functioning. A spin of a crankshaft creates a vacuum pressure and hence sucks fuel from the tank. Before the fuel is sent off to the cylinder, it is mixed with air. Anything that restricts the flow of fuel and air will cause your mix to be off and so it will not ignite in the cylinder.

Things that restrict the flow of fuel are:

Check, clean, and replace all fuel parts for healthy and well-functioning chainsaw.

Carburetors must be checked thoroughly as it pushes fuel into the cylinder and regulates through three chambers:

This process needs to run smoothly. If parts are worn, install a carburetor upgrade kit before replacing a carburetor.

For the entire spark and fuel system, compression is very important. It is generated when the piston is moved up and down in the cylinder along with the crankcase. Compression can get compromised from an air leak somewhere inside the engine or form a clogged fuel or air system. If it is not regulated properly, the piston can seize up in the cylinder and end the engine life.

How to fix a Poulan Chainsaw?

If your Poulan chainsaw is not working, the first thing you need to check is fuel. Make sure always to use a fuel mixture of 1-gallon fresh unleaded gasoline and 3.2 ounces of POULAN 2 cycle air cooled engine oil.

Make sure your fuel is not flooded. When you mix oil and fuel make sure it won’t exceed more than 90 days. In the same way check, your spark plugs if it is wet, it needs to be replaced.

Moreover, there are several other things to be checked when your POULAN 42 cc chainsaw is not working. They are mentioned below:

Just In: Why Were Chainsaws Invented?

How to fix a Husqvarna chainsaw that Won’t Start?

There are some common solutions to fix your damaged Husqvarna Chainsaw. Let’s have a look at it.

Inspect the spark plug. It is defectively removed. In the same way, if porcelain is cracked, if an electrode is damaged or burned away replace it. Keep in mind if your plug has not been replaced in a few seasons, replace it anyway.

Leaving fuel in the chainsaw for a long period of time results in a clog of the carburetor. If your carburetor is clogged, try to clean it with cleaner. If it won’t work, replace it.

Quench your ASMR thirst while watching this restoration video of an old Stihl chainsaw from Restoration Skills:

In this article, we discussed how to fix a damaged chainsaw and make it properly functional. Different types of chainsaws as Husqvarna, POULAN, and STIHL and their possible faults are explained. That said, some basic problems such as fuel, coil, plug, and carburetors faults are highlighted as usually they are the cause of damaged chainsaw.