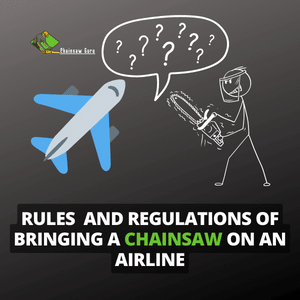 You need permission from your airline for bringing the chainsaw on an airline.

For that, you are required to satisfy your airlines that your tool is safe to travel with and won’t cause any harm with documentation and proof.

Traveling with a chainsaw is challenging and you should be extremely cautious when doing that since it can be deadly, especially with gas-operated chainsaws. You can’t just bring it in your carry-on or checked bag.

Some rules and regulations are to be followed otherwise the airline can confiscate your saw and cancel your flight.

This article will guide you on how to bring a chainsaw on an airline with you, the guidelines, preventions, and other pertinent things to do before setting off for the airport.

Let’s get back to answering ‘Can I bring a chainsaw on an airline?’ without any further ado:

Not following these restrictions can cause damage to the people and property on board since combustion engines containing liquid can catch fire or even explode. The guidelines to board a chainsaw are as follows:

Purging must be done by the dealer along with the documentation of the equipment that is purged. Steps you can follow after purging

A newly packed chainsaw imposes no issue; you can carry it as a checked bag without facing any problems.

In case the airline finds the restricted item in your bag during screening, they can

Chainsaw Shipping Rules for Airplane in 2022

That covers electric and battery-powered chainsaws but as for fuel ones, TSA does not allow for both carry-on and checked. A new one that has not tasted the fuel won’t cause any issues. But for a completely purged chainsaw, you can ask the respective airlines. Even then you’ll have to

Is Chainsaw Allowed on an Airline?

Yes and no. According to the TSA Twitter handle on December 20, 2018

‘Generally, chainsaws free of residue and vapor of gas/oil are allowed in checked bags.’ We recommend that you inspect the chainsaw & then talk to your airline representative to determine if they will accept it. Please see FAA guidance.’’

Depending on the power source each type has some guidelines of its own.

Fuel-powered: No, unless it is completely purged or brand new.

Electric-powered: Maybe yes, due to lack of data availability on exact keywords.

Can I Bring a Battery-Powered Chainsaw to an Airline?

The rules for bringing a battery-powered chainsaw are based more on the battery than the size of the saw itself. According to FAA guidelines

Ask the airlines for the details of the size.

Can I Bring an Electric Chainsaw to an Airline?

TSA has no specific category for an electric chainsaw but it does allow 7-inch tools without mentioning the power source and some other electric tools as checked bags with special instructions.

With all the information gathered it looks like it is allowed given the blade is securely packed. But it is recommended to ask the TSA (contact them on their social media) and your airline.

Can I bring a Mini Chainsaw to an Airline?

Yes, if your saw is 7 inches, measured from end to end, and properly secured can be brought in as a carry-on. If it is bigger you may still bring it in following cases

Still, make sure to ask your airline for exact instructions before shipping the best mini chainsaw.

Final Thoughts: Can I Bring a Chainsaw on an Airline?

The answer varies with the power source. Battery powered? Yes, but it depends on the battery. Electric power? Yes, but ask your airlines. Gas-powered? No, but if it is completely purged with documentation or it is a new piece then it could be a yes.

If you feel confused after all this, call your airlines and ask the TSA through their social media. As an alternative, you can ship it separately or buy a new one.

In any case, take permission from airlines and follow their instructions to avoid any hassle on the day of departure.