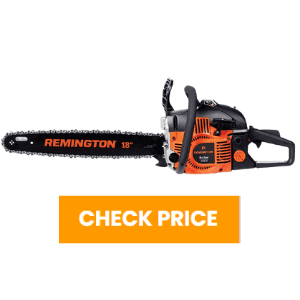 Whenever we talk about gas-powered chainsaws, the only thing that comes to mind is cutting tough wood materials with ease.

That said, I’ve reviewed the likes of Poulan Pro 18 and 20 Inch chainsaw models earlier, which gave a superior performance. However, these saws weren’t a good fit when it came to cutting extremely thick standing trees.

In this context, I had to research a chainsaw that not only offered exceptional power but could endure harsh cutting conditions as well.

So, I’ve got the brand new Remington 18 inch chainsaw this time, which looks quite promising.

Today, we will focus on how Remington Outlaw RM4618 chainsaw tends to the needs of homeowners who’ve got to finish some tough woodwork tasks.

All in all, let’s dive right into the Remington 18 inch chainsaw reviews as follows:

What Makes Remington 18 Inch Chainsaw a Standout in 2023?

Adding to that, it also features a long enough bar with one of the sharpest chains available in the market to make cutting look convenient enough.

The Outlaw RM4618 with its easy to use interface, QuickStart technology, and rugged construction is what makes it a standout among other chainsaw brands.

Enough with the praise!

Have a look at what I experienced the first time I got this chainsaw from an online retailer:

Our Remington 18 Inch Chainsaw Reviews in 2023

So the box arrived early enough in the morning and as usual, it was bulky enough because the chainsaw was fully assembled already.

I unpackaged the box, took out the chainsaw, and my first impression after handling it was, “WOW! I’d love cutting wood with this beast.”

Anyways, the box also included a user manual that had clear instructions available for those who are new to using gas powered chainsaws.

I used the 50:1 fuel mix and closed the lid tightly. Unlike the Milwaukee M18 chainsaw, this one didn’t have a transparent fuel box, so I got a little bit disappointed.

However, the chainsaw looked quite smooth, easy to handle, and sophisticated enough.

It took me only one powerful pull to make the chainsaw operational. Thanks to its QuickStart technology that didn’t allow any extra hassle.

Well, I loved the sound of the engine as it felt like I was using a chainsaw with tremendous power. (Pun Intended)

Starting with some thin limbs and wood logs, the chainsaw cut them like they were nothing.

Further on, I moved on to some tough wood logs and I was surprised to see the balance Remington chainsaw offered. The 5-point anti-vibration system really helped me cut a thick enough wood log in a single go.

Plus, the multi-angle handle was also present, which allowed me to hold the chainsaw as per my own will and wish. I also used it for cutting some tough standing trees and its performance was solid enough.

In a nutshell, Remington Outlaw RM4618 is one of the most powerful chainsaws I’ve used up till now. The price’s, however, a little bit exaggerated, but that’s okay considering how durable and sturdy the chainsaw is.

So, that was all about how I got my first experience with Remington chainsaw.

Let’s talk about some of the technical features it offers and how they combine together to benefit a homeowner:

The chainsaw, first of all, features a powerful full crank 46cc engine that simply delivers an exceptional cutting performance.

You can expect it to do all the tough and dirty job for you be it cutting thick wood limbs, standing trees, clearing out a storm, or slicing thick wood logs.

The engine, on one hand, is powerful enough to cut through anything placed in its way. On the other hand, its fuel consumption is well up to the mark, thanks to the latest technologies used by the manufacturer in it.

However, one thing that will bother you a little bit about the chainsaw is its bulkiness. The engine being powerful enough takes a lot of space and makes the chainsaw heavier than the likes of Poulan Pro, Blue Max, or Milwaukee chainsaws.

Coming towards the bar, it’s 18 inches long and is made up of premium stainless steel alloy.

It enhances the durability of the chainsaw and allows deep penetration cuts at the same time.

Moreover, the low-kickback chain is extremely sharp and it won’t let the chainsaw bar get stuck into tough wood materials.

For testing how sharp and effective the bar and chain mechanics are, I tried cutting a thick wood log without even turning it around.

I was surprised to see that the chainsaw cut right through it from start to end without causing any problems or issues.

Tells you about the splendid job Remington has done in introducing the Outlaw RM4618 chainsaw.

This is something interesting and an updated technology to keep the chainsaw in your control.

The special 5 Point Anti-Vibration system equipped in Remington gas-powered chainsaw distributes all the vibration throughout the machine.

So, what happens is that you won’t feel any pressure or kickback even if you are dealing with stubborn wood-cutting material.

I literally didn’t face any problem with the chainsaw as I was able to control it quite well while cutting some of the wood limbs in my backyard.

So, that’s an exceptional feature, which has made this chainsaw a hot-selling piece of cake in the market for sure.

You do know that it took me around 15 tries to just start the Blue Max chainsaw right? Same was the case with Poulan Pro models.

However, with the QuickStart technology available in Remington Outlaw, it took me only one try to make the chainsaw operational.

Yeah, you heard it right. Only one powerful try and the chainsaw started without any hassle.

The good thing is that this QuickStart technology works like a charm, especially when you reside in colder regions.

Will take you no more than 5 tries to make it functional even if it’s freezing cold outside.

A properly cushioned handle with a multi-angle design helps you hold the chainsaw with ease and convenience.

This multi-angle handle works like a charm though. It did help me cut some really tough wood blocks and standing trees without any hurdle.

Amazed to see that this feature isn’t provided in any of the two Poulan Pro models and Blue Max Chainsaw I tested earlier.

Milwaukee M18, however, has it and it’s quite helpful at the same time.

The video tutorial of Remington 18 inch chainsaw reviews go as under:

Well, enough with the features. Have a look at some of the things you’ll love about the chainsaw:

What Do You Get with the Remington 18 Inch Chainsaw in 2023?

The package includes a fully assembled gas-powered chainsaw along with a complete user manual.

Some maintenance parts including a chain adjusting and tightening tool are also present inside the box.

A compact yet premium bar and chain oil bottle is also included to help you keep the chainsaw lubricated enough.

Homeowners have had their share of rating the Remington RM4618 chainsaw as well. Here is the breakdown of how they rated the model from different aspects:

Roger Wilco from Vine Voice shares his views about the Remington Outlaw as follows: “First impressions? The chainsaw looked reliable and rugged enough. Took it out from the sturdy black case and it was already assembled. Fueled it in and it took me two tries to make the chainsaw operational. Gotta say that this is one of the most powerful chainsaws I’ve ever used. One shortcoming, however, is that the fuel cap has no locking mechanism, which could backfire at times. Other than that, it’s simply the best gas powered chainsaw out there.”

P. Miller, one of my neighbors, had somewhat mixed views about the Remington R4618. According to him, “Well, the chainsaw didn’t impress me much. I mean I had a simple chain adjusting issue and I called customer service, which was literally a JOKE. Got some thin and medium limbs to cut with it and honestly it is powerful enough apart from the chain adjusting issue.”

Why Purchase the Remington Outlaw 18 Inch Chainsaw in 2023?

Remington has incorporated technologies like an anti-vibration system, QuickStart interface, and powerful bar/chain mechanics into RM4618.

Besides, it can cut right through thick and medium wood logs without causing any kickback or jamming issues.

However, the price is a little bit costly, I must say that choosing Remington 18 Inch Chainsaw is worth a try, especially if you are aiming for a long-term investment.