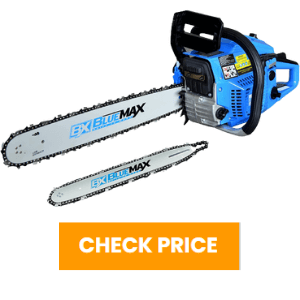 After having a detailed discussion on two of the most versatile gas-powered chainsaws, i.e. Poulan Pro 18 inch, and Poulan Pro 20 inch, it was time to try something out of the box.

So, I thought, why not give a try to the Blue Max Chainsaw as it looked quite sharp, smooth, and cool with the first impressions.

That said, today we will break down the Blue Max gas-powered chainsaw. My focus will remain on whether it could meet the power and efficiency of brands like Poulan Pro or not.

Let’s, therefore, get right into the Blue Max chainsaw reviews as follows:

What Makes Blue Max Chainsaw a Standout in 2023?

First things first, the fact that it comes in with two different bars and chains gives it an edge over other chainsaws available in the market.

Furthermore, it’s not too bulky as compared to the likes of Poulan Pro 20 inch chainsaw as you can easily handle and transport it from one place to another.

Last but not least, the affordability of the gas chainsaw is what makes it a standout among other chainsaws.

Our Review of the Blue Max Gas Powered Chainsaw 2023

I got the chainsaw delivered to my doorstep a few weeks ago. 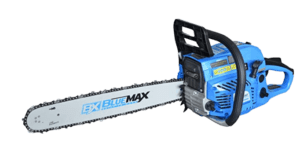 The first impressions were a bit awkward. It was just a cardboard box and it seemed like I had made a mistake of ordering the chainsaw.

However, first impression is not the last one and that’s what happened to me.

Right after I unpackaged the box, there was a sturdy ABS plastic case present there that I took out of the box.

Along with that, the 20 inch chainsaw bar was also present. It was also protected properly via ABS plastic housing.

Now, what you need to know is that all the parts came in disassembled. Even the chains were not installed on the bar. So, it took me round about 10 to 15 minutes to assemble it properly.

Right in the box, you’ll also get a complete user manual with some maintenance tools that you could use later.

Compared with the Poulan Pro chainsaws, this one gave me a tough time, i.e. took me a good half hour to actually assemble and get it operational.

Done a few experiments on cutting medium wood logs and it sliced them quite well.

On the other hand, it took some time to make its way through thick wood logs, but I think it did well considering the 45 cc engine it had got.

Overall, I’ll give Blue Max 20″ gas chainsaw a solid 8/10 based on first impressions, start-up, and some random experiments.

The story, however, doesn’t end here!

Let us now get back to discussing some of the major features of this chainsaw:

Thanks to the efficient and powerful 52cc engine, the chainsaw performs better than rest of the counterparts and gives almost 40% better performance.

That said, as per the official statements from the brand, Blue Max chainsaw offers 2,700 to 3,400 RPM speed when it’s idle.

However, when cutting wood materials, the speed could go as high as 10,500 RPM which is simply superb.

Automatic oiler is already there to keep the engine on the safe side. Thus you could expect an exceptional performance on it while cutting medium wood logs or firewood pieces.

What I liked the most about Blue Max gas chainsaw is that it comes with 30% more chain teeth compared to its competitors.

I, in fact, felt like slicing a hot cake with a sharp knife while I was cutting wood logs just outside my home with this chainsaw.

So, that’s something for which I’d surely appreciate the efforts of the manufacturer as it saves time and extra energy.

However, it simply isn’t worth it. It took me around 10 to 15 good tries to make the chainsaw operational even with the choke out.

So, as per my experience, I liked the EPS system more as it took me no more than 5 tries to start both 18” and 20” versions of Poulan Pro.

You can still try it out nonetheless. Could work out for you maybe or maybe not.

Well, yeah I must praise the anti-vibration handle of the chainsaw.

Not only did it give me full control, but I was also able to complete cutting work within a short time. That too without facing any fatigue.

Also, Blue Max chainsaw is center balanced to make sure that it remains stable enough and doesn’t fire back while you are busy cutting wood trunks.

Along with other features, the variable speed button control is obviously available.

It’s installed at an ergonomic position, i.e., just inside the handle to make sure that you can keep the chainsaw controlled enough.

Compared to Poulan Pro, I noticed that the Speed Control button of Blue Max was quite responsive.

An efficient chain brake is installed to ensure a safe working environment.

You could apply the brake whenever you feel that the chainsaw is getting out of your control.

Although it won’t happen anytime soon, it’s still better to know this feature as it could help you out in emergencies.

Have a look at the unboxing and first impression of Blue Max Gas Chainsaw on YouTube:

Let’s have a look at some of the benefits and disadvantages of Blue Max 8901 chainsaw:

What Do You Get with the Blue Max 20″ Gas Chainsaw?

The box includes a long 20″ chainsaw bar along with the engine.

Furthermore, the ABS plastic box includes a chainsaw machine, a user manual, and some maintenance tools.

That’s all about my use of the Blue Max Chainsaw. Moving on, let us take a look at how customers have rated this chainsaw:

Customer Ratings (Out of 10)

I’ve also got the views from some expert homeowners who’ve been using gas-powered chainsaws for quite some time.

Micheal Miller says that, “This saw offered me great value for the money. Although it took some time to get assembled and I had to try kicking it a lot at first. However, it got really easy to start later and I simply loved the easy-to-use interface offered by Blue Max 20″ gas chainsaw.”

R.Corbett, on the other hand, gives a solution to kick-starting problem as follows, “I needed a versatile chainsaw in a limited budget and got this bad boy from Blue Max. If you are facing issues to get it started, then simply give a read to the manual and download its tutorials from official website of Blue Max. I tried all the suggestions they gave and started the chainsaw with a single pull.”

Why Should You Purchase the Blue Max Gas Chainsaw in 2023?

If I have to sum this chainsaw up in one word, then I’d say that it’s all about “Affordability.”

You’d get to enjoy the interface of two different chainsaws confined in a single machine.

Everything is well up to the mark even though it’s made in China. On top of that, the durability of the chainsaw could not be ignored.

These are some of the reasons to invest in this powerful, sturdy, and portable gas chainsaw in 2023.